Previous Next
The Solitary Role

But it is you, a man like myself, my companion, my close friend, with whom I once enjoyed sweet fellowship as we walked with the throng at the house of God. – Psalm 55:13-14 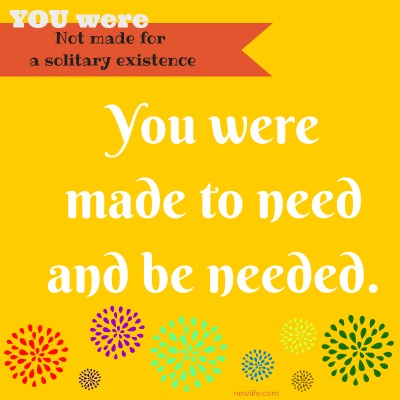 Evan owns a small business with one employee. He prides himself on his precision craftsmanship that keeps a steady stream of customers lined up and waiting. He’s been urged to expand his shop and hire more employees, but Evan likes things small and controllable. He doesn’t want to grow, because he doesn’t want to get in a position where he needs his customers more than they need him.

Evan has the same attitude about his relationship with his wife.  He keeps his thoughts and feelings well hidden because he feels he must act as if he doesn’t need anything from her. His wife and children don’t feel they know Evan, because he never shares anything from his heart. In addition, he has no close friends.

Evan learned in his upbringing that it’s not manly to need anyone. He picked up early in life that his father didn’t need him.  And by spending more time on his career than with his family, Evan’s father conveyed the idea that Evan shouldn’t need him either.  So Evan grew up feeling that he must face life without any help.

Are you living a solitary life like Evan? Is it okay to be needed by others, but you can’t commit to need anyone else? Your choice for solitude and distance are depriving you of your basic needs for love, relationship, and intimacy. The longer you play the solitary role, the greater your loss. You were made to need and be needed. Don’t be afraid to connect.

If everyone is moving forward together, then success takes care of itself. – Henry Ford